Next morning as Jenassa and I are having breakfast, we overhear a conversation between the innkeeper and another one of the townsfolk.  It seems this guy is well acquainted with Klimmek, the man we met on the bridge yesterday who gave us the sack of preserved food.  The two of them appear to be in business together as the local fishmongers.

Sounds like the Greybeards eat a lot of dried fish.  In fact, that probably accounts for most of their diet.  And I thought living on top of a frozen rock was bad enough.

I suppose we should let Klimmek know that his bundle of provisions made it to High Hrothgar.  I make some inquiries and learn that he lives directly across from the inn.  So after breakfast, we finish packing and head over to Klimmek’s house.

Fortunately we catch him at home, in the midst of preparing his own morning meal.  To his credit, he gives us a hefty sum of gold for making the delivery on his behalf.

As we leave the house, Jenassa and I discuss our plans.   We decide that Whiterun is a lot closer than Ustengrav, the last known location of Jurgen Windcaller’s horn.  We’ve learned from the locals that there’s a cave nearby with some bears, so we’re going to try to obtain that last bear pelt for Aela — especially since neither of us have much faith in Ria’s hunting abilities.

Our horses seem to have been treated pretty well at the Ivarstead stables, as they’re both in high spirits.  They toss their heads playfully and nicker at us, as if pleased they’re about to get some exercise.  We pack some of our extra gear in the saddlebags, mount up, and head out.

The weather is warm and sunny, perfect for traveling.  The cave is just off the road across the bridge to the south.  As we ride closer, we can hear the lazy buzzing of bees.  Several hives hang from the rocks and trees, dripping with honey.  No wonder this place is popular with bears.

We dismount at a distance and slowly approach the cave.  Except for the bees and the chirping of birds, all is quiet.  Sunlight filters through the autumn leaves, turning the landscape as golden as the honey.

Suddenly we hear a deep thundering growl that shatters the peace of the forest.  An angry bear bursts out of the cave, closing the distance between us with alarming speed.  I barely have time to raise my weapon before it barrels down on me.

This bear is definitely a fighter.  It gets in several good blows before Jenassa can pull out her bow, and I do the best I can to defend myself with my mace and shield.  I wildly bash the beast in the face, but its claws and teeth are taking big chunks out of me.  My health dips alarmingly and I reach for a healing potion just in time.  Too close!

Finally the bear hits the ground and I unsheathe my hunting knife, but for a moment I hesitate.  I’m much better at skinning than I used to be, but there’s still a chance I could mess this up and get nothing but a ruined bunch of scraps.  Mentally crossing my fingers, I check the edge on my knife and get to work.

I process the rest of the carcass for the meat and alchemy ingredients, and we decide to check out the interior of the cave.  We could always use more materials, and the locals seemed to think these bears were becoming a problem.   Might as well do us all a favour.  We drop to a crouch, ready our bows, and enter the cave as quietly as possible.

There are two bears in the cave, and the first goes down quickly.  The second manages to charge right at us, but our combined attacks drop him before he can do much damage.

The cave is fairly small, about the size of the troll cave back in Whiterun Hold.  Inside there’s the remains of an unfortunate victim, and a chest — no doubt what the unfortunate victim was trying to reach before he realized that the cave was already occupied.

My hunting knife gets some more use on the other two bears, but we don’t get much from the human corpse.  Turning to the chest, I open it and — whoa.   That’s it.  I’ve finally snapped and become schizophrenic, because now I’m hearing voices.  Very LOUD voices.  Deafening, actually.

I look around confusedly but no one’s there.  Well, Jenassa is there, obviously, but I don’t think she’s raised her voice like this in the entire time I’ve known her.  And unless she’s learned how to throw her voice and make it sound completely different — not to mention, utterly ear-splitting — there’s another presence here in the cave with us.

I’m told to go to a place called Mount Kilkreath.  I turn around and look at Jenassa to see if she’s hearing any of this, and I’m immediately heartened.  Oh good, this voice isn’t all in my head, because she’s clearly hearing it too.  Maybe I’m not going crazy.

The voice finally fades out, and I shake my head to get rid of the ringing in my ears.  It doesn’t work.  My companion wears a fixed expression and her face is paler than usual.  She stares at me as if I’ve grown an extra head.

“What in Oblivion was that?”  I ask her.

Jenassa’s aspect changes to one of disbelief.  “Surely you must know.  That was a Daedra, summoning you to her temple.  She no doubt intends to make you her champion.”

I swallow.  I’ve heard of the Daedra, but I’ve never paid much attention to them before.  They were just strange, remote, powerful entities with obscure motives that hadn’t anything to do with my life.  Until now.

“I do not think it would be wise to defy her summons,” Jenassa murmurs, as if even considering the thought could have dire consequences.

“But not all Daedra are… the friendly sort,” I point out hesitantly.

“True,” she replies.  “We can only go and see what it is she wants.  Perhaps there will be no need to refuse her.  But you have her notice now, and she will find you, wherever you may hide.  Mortal cowardice is the one thing no Daedra will tolerate.”

“It doesn’t sound as if I have much choice,” I mutter to myself.

Jenassa grimaces at me.  “You don’t,” she says.

After learning that Mount Kilkreath is even farther away than Ustengrav, I decide to visit Whiterun first.  My companion is somewhat reluctant to agree, but she concedes that Whiterun is on the way, and it would be a good idea to sell our extra loot and make some needed upgrades to our gear before we undergo another long journey.

Our intention is to ride straight to Whiterun, but the weather has other ideas.  It starts to rain just before we reach Riverwood.  By the time we cross the bridge on the other side of the village, the shower is turning into a thunderstorm.   Fortunately I manage to find a familiar path in the trees.  We make a swift detour, and in minutes we reach the small hunting cabin in the woods.

The interior is even more crowded with two people, but Jenassa seems mildly impressed that I even knew this place existed.  It’s a pretty tight squeeze with both of us in here, but fortunately the thunderstorm only lasts for a couple of hours.  We grab a snack and catch a quick nap in the meantime.  Climbing a mountain one day and fighting bears the next is surprisingly tiring.

Soon the rain stops, the clouds part, and we continue on our way.  The sky is still overcast and the light is fading, but we don’t have far to go.  In less than an hour we reach the surrounding farmland with Whiterun just beyond.  I can feel a smile spreading over my face as we ride toward the gates.

As we enter the city, we notice the colourful lanterns and banners hanging from the rooftops.  It’s the Mid Year holiday and the city is all decked out for the festivities.  The celebratory atmosphere matches my lighthearted mood.  We’ll only be in the city for tonight, but there’s no place I’d rather be.

We visit several shops to sell our accumulated loot, upgrade our gear, and restock our supplies.  It’s good to see so many familiar faces once again, and they greet us cheerfully as they wish us a happy and prosperous Mid Year.

Since I’ll be returning to Aela to give her the last bear pelt, we decide that I’ll stay at the Companions overnight while Jenassa returns to the Drunken Huntsman.  As we enter the little pub, a stranger approaches us.  He introduces himself and tells me he’s been sent by his master to find me.  At first I’m suspicious — this better not be about my former business partner, also known as the backstabbing rat bastard.  But no, it seems this is about the dragons. 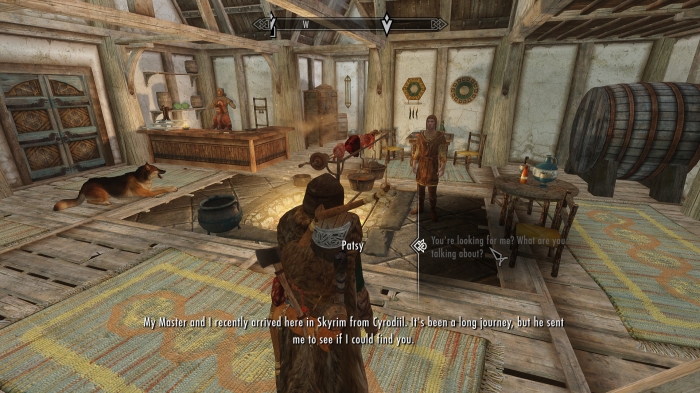 Sheesh, news travels fast.  Take out one flying lizard and suddenly I’m a celebrity.  Look, mate, tell your master to get in line — I have an appointment with a Daedra, and I doubt she’d appreciate it if I kept her waiting.  If I have time afterward, and if the Daedra doesn’t turn me into a newt, I’ll swing by Falkreath.  Eventually.

I bid Jenassa good night and head up to Jorrvaskr.  The festival lanterns around the village green make the gloom of the overcast sky seem almost cheery.  Even the incessant sermon from the lunatic preacher sounds welcoming.

As I enter the front doors of Jorrvaskr, Aela rushes over to greet me.  Most of the other Companions seem to be downstairs in the living quarters, but as I talk to Aela they start finding their way into the dining hall.  She smiles, looks over the bear pelts, and thanks me for my efforts.

She mentions that she has more work if I’m interested.  When I hesitate, she hastens to inform me that it’s a fairly simple assignment — to slay a wolf that’s invaded someone’s house.  Sure, why not.  I’ll try to work it in somewhere between visiting Falkreath, excavating old horns, and being drafted by Daedra.  No problem at all.

The other Companions have found their way to the upper floor by now.  Several are talking among themselves in a corner, and when I start to walk by, they swiftly pull out a chair and invite me to sit with them.  A mug of Honningbrew is pushed into my hand and they turn toward me, eager to hear about everything that’s happened to me since I left.

I’m a bit startled by all the attention, but as I look around at their faces, I can sense their interest and concern.  I lean back, take a swig of mead, and start reliving it all for my audience.  Tomorrow I’ll have to head back out into the unknown, but tonight I’m surrounded by goodwill, warmth, and quiet strength.

It’s good to be home.