Next morning, I awaken in the middle of a large comfortable bed with a soft pillow under my head, and for a moment I’m not entirely certain where I am.  The accommodations certainly seem top-notch, however.  Is this an upscale inn?  A friendly noble’s dwelling?  Then I remember that this is my own house, and that I’m the noble — at least here in the region of Falkreath.  Grinning, I sink back down under the warm bedding and stretch out, slowly and luxuriously.   It’s good to be Thane.

Now that my brain is starting to work again, I piece together more details from my surroundings.  From what I can tell, Jenassa seems to be downstairs and in the middle of breakfast.  I can’t hear anything from the housecarl’s room, so I assume she’s already outside on patrol.  I suppose I must’ve slept in — not too surprising, given recent events.  Especially that whole rampaging werewolf thing.  Which I’m refusing to think about right now, since that would ruin the first morning in my newly remodeled house — sorry, I mean manor.  I’ve never had a manor before, and by the Divines, I’m determined to enjoy it while I can.

Over a delicious breakfast of steamed mudcrab and scrambled eggs, Jenassa and I discuss our travel plans.  Since Delphine wants us to meet with her contact at the Winking Skeever, and since we’ve also been tasked to scout out possible recruits for Helgen at several inns, we decide to drop by the Bannered Mare in Whiterun on our way to Solitude.  It won’t take us too far out of our way, and if we can find a likely recruit or two on our travels, then that’s all to the good.  With that decided, Jenassa and I pack up our travel gear and head outside to put Rayya back in charge of the homestead.

As we mount up and head out, I realize I’m feeling much more secure about leaving Rayya behind to guard the house. Glancing backward at the improved manor, it appears imposing and solid, a great deal less vulnerable than a one-room cottage.  On the other hand, it might also seem more attractive to bandits, but I’m confident that our housecarl will be an effective deterrent.  However, since we’re already going to be recruiting guards, perhaps we should also recruit someone to help Rayya look after the property.  At the very least, she’d get a bit more sleep that way.

Fortunately the day is bright and clear, perfect weather for traveling.  We ride with the wind at our back and the sun on our faces.  As we reach Riverwood, we decide to keep on going, unwilling to risk another encounter with Delphine until we’ve spoken with her Bosmer contact.  Perhaps he can give us some insight into Delphine’s persistent belief that the Thalmor are somehow related to the return of the dragons.  It still seems unlikely to me, but what do I know?  I’m not about to involve myself in politics — I’m just the Dragonborn.

Jenassa and I are approaching the Honningbrew Meadery when we suddenly hear raised voices.  Just off the path are three Redguards, arguing among themselves.  Two armed men appear to have stopped a woman on the road.  The woman is dressed in simple peasant clothing, and it’s obvious that she’s none too happy about being detained.

Slightly concerned, I dismount and slowly approach the group just in case things turn ugly.   Although the woman is clearly alarmed, she refuses to be intimidated by the two men harassing her, telling them to back off and leave her alone.

With that, one of the men steps toward her, and my hand starts to reach for my sword in case this unarmed peasant woman needs defending.  But the man is stopped by his brother-in-arms, who points out that she doesn’t have a scar.  After a brief discussion, they conclude that this Redguard woman isn’t the one they’re looking for — but instead of apologizing to her for their aggressive behaviour, they tell her to move along before her mouth gets her into trouble.  Right.  I don’t know who these guys are or what they want, but one thing is clear — they’re serious assholes.

Jenassa has arrived during this exchange, and perhaps because they now realize they’re outnumbered, the two Redguard men turn and walk away.  I approach the woman to see if she needs any help, as well as to ask her about what just happened.  Other than being a bit shaken, she seems fine — but more than ready to take someone’s head off.  Can’t say I blame her.

Now that the situation has resolved itself, Jenassa and I continue on our way.  When we reach Whiterun, we run into a group of Imperial soldiers patrolling the streets.  Their presence is a not-so-subtle reminder of the ongoing Civil War, the conflict that threatens to tear Skyrim apart with a ferocity that rivals the rise of the dragons.  It represents the ultimate in division and discord, the tragedy of a noble society torn asunder, a nation eating at its own heart in its lust for power and blood.  I’m grateful that, as a Breton, I have the option of choosing not to get involved — although as the war drags on, I wonder how long I’ll be able to retain that privilege.

Musing on these dark thoughts, I make my way down the city streets toward the Bannered Mare.  Jenassa and I are just passing through the marketplace when I catch sight of a familiar figure standing by the central well.  Wait… really?!  What in Oblivion are you doing here — and while we’re at it, how’d we get roped into doing your job?!

Unbelievable.  Marcus’ servant, Patsy, seems completely unfazed when Jenassa and I demand to know why he stopped recruiting guards for Helgen.  After all, he’s the entire reason we’re here.  According to Marcus, it was Patsy who posted notices around a few cities, and then arbitrarily decided he was allergic to carriage rides.  If we’d known he decided to stop traveling at Whiterun, we could’ve saved ourselves a trip.

On second thought, Patsy would make a terrible recruiting agent.  It’s apparent that he’d agree to hire anyone over a mug of cheap ale, and Helgen would be stuck with a ragtag bunch of drunkards and deadbeats.  I fume to myself for a few moments — then in a burst of inspiration, I tell Patsy there’s been an emergency back in Helgen and that Marcus expects him to return immediately.  No questions asked.

Okay, so that wasn’t exactly true — or true at all — but it’s amusing to witness Patsy’s shocked reaction.  Jenassa and I grin at each other as we watch his retreating back running toward the Whiterun gates.  Serves him right, the useless twit.  Come on, Jenassa, might as well head to the inn and check out the prospects.

I have to admit, I kinda like this guy.  Being a Breton is obviously a plus, and there’s something about him that reminds me of… well, me, when I first came to Skyrim.  And he’s totally right about the mudcrabs.  Miserable pinchy little buggers.  Only good thing about them is how they taste with garlic butter.

That being said, it’s apparent that Kindrick here isn’t exactly a hardened warrior, and frankly I’m not sure how he’ll handle the military discipline under Valerius.  There’s going to be a lot of drilling and patrolling and all those other soldiery things back in Helgen.  Heck, I’m not sure I’d want to do it, never mind this milkdrinker.  I better do him a favour and let him down easy. 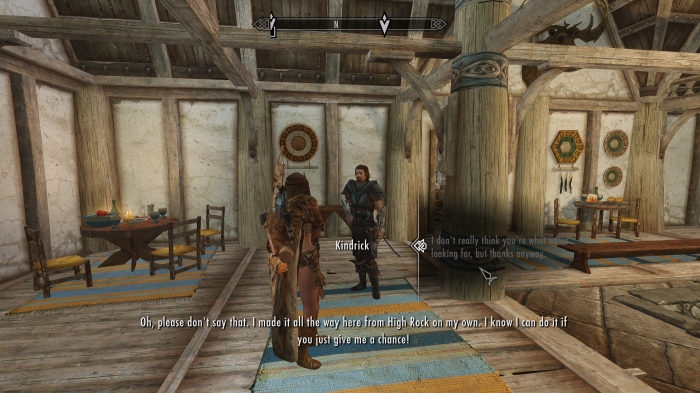 Holy sweetrolls, I can’t refuse — it’d be like kicking a puppy.  On the other hand, he really doesn’t seem up for the life of a city guard.  I’m surprised he managed to find his way to Skyrim, as it seems like he’d have a hard time just stepping outside the door.  Hmm, wait a minute — that gives me an idea.

As my very first recruit heads out into the world, Jenassa catches my eye and nods toward the kitchen at the back of the inn.  I take a peek through the doorway, but I don’t see anything unusual — just the barmaid tending to the food that’s cooking over the fire.  Oh wait.  The Redguard barmaid — and those Redguard men on the road who were looking for a Redguard woman.  I mean, I highly doubt the barmaid has anything to worry about, but I suppose it’s worthwhile to pass on a friendly word of warning.