Next day, I ask Jenassa to stay at the inn while I dash over to the Companions.  Outside it doesn’t look promising.  It stopped raining, but the sky is low and overcast.  Looks like more bad weather is headed our way.

As I ascend the steps to the mead hall, I’m inclined to ask Aela what in Oblivion she was thinking to send me into a troll den.  But then I recall she said when she gave me the assignment that no one had positively identified the beasts. Fine. I’ll give her the benefit of the doubt… for now.

Fortunately I don’t have to look far to find Aela — she’s right inside the door.  Behind her, the rest of the Companions are just finishing their morning meal. Maybe it’s sight of people eating or that I haven’t had breakfast yet, but I suddenly realize I’m starving. I report to Aela just as my belly starts to grumble.

She gives me my payment and mentions that she has more work. Yes, fine, whatever. All the others are leaving the table. Just let me end this conversation so I can eat!

Before I know it, I’ve agreed to collect bear pelts as my next assignment.  Not ideal, but at least they’re not troll pelts, right?  But then Aela says something that gives me pause.

No no, Aela, that’s fine! You don’t need to go to all that trouble! Your assignments are plenty interesting! Honestly, I find them fascinating! Really!

My protests go unheeded. She flashes me a little smile, assuming I’m joking, and wanders off. Great. Just great. Maybe after I deal with the bears, I can get another job from Farkas. I’m not fond of punching priestesses, but there’s less chance of it resulting in my hideous and painful demise.

Since I’ve missed breakfast, I head downstairs to find something to munch on.  Usually there’s plenty of snacks lying around such as fresh bread, fruit, and cheese.  I also have food in my backpack, but I’d rather not eat my travel rations.

As I open the door to the living quarters, I hear the sound of angry bickering.  Two of the “whelps”, Njada and Athis, are having a heated disagreement.  I can’t hear exactly what’s being said, but it’s clear they’re not happy with each other.  Finally Njada breaks off the conversation, turns her back on him, and sits at a table with a mug of ale.  Athis storms off in the opposite direction.  I sit down beside Njada and make myself a cheese and venison sandwich while she stares into her drink.  I turn to ask her if she’d like to talk when she snaps at me.

Seriously?  Fine, I can take a hint.  I grab my sandwich and walk away.

Athis is leaning against the wall, looking like a thundercloud.  I’m still curious, so I ask him what happened.  If he gives me a hard time I’ll just throw my sandwich in his face.  (Or maybe I won’t.  It’s a pretty good sandwich.)

So wait, you’re saying that you got into an argument but you don’t know why?  Your best guesses are that she’s an irrational woman on the rag, she’s secretly attracted to you, she’s a bigot, or that she can’t handle a challenge?

Dude, we haven’t been arguing, but now I want to smack you upside the head.  You’re not only clueless, you’re kind of an asshole.  Sweet merciful Mara, I’m starting to sympathize with Njada!

Athis heads out the door.  I finish my sandwich, grab a sweetroll for dessert (…what, breakfast can’t have dessert?) and wander into the sleeping quarters.  Njada follows me in, still looking defiant but somehow vulnerable.  I decide to swallow my annoyance and give her a second chance to explain what happened. 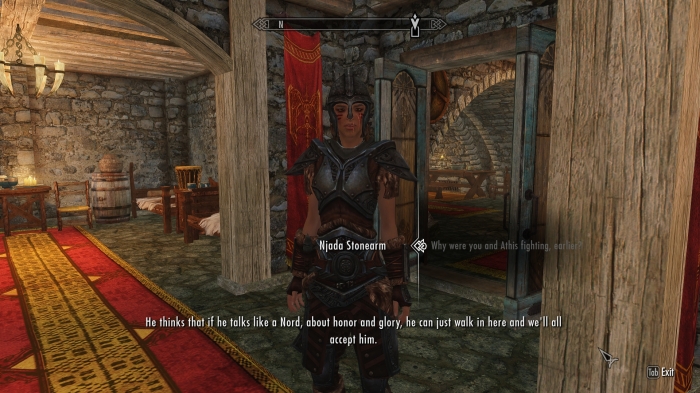 Y’know, I can’t exactly say I’m warming up to Njada, but she’s not stupid.  She even makes a certain amount of sense.  Interesting.  There seems to be some deep sources of conflict among the Companions, despite their outer impression of solidarity.  I have to wonder if there’s any conflict between the elder Companions as well, or if it’s just among us whelps?

At any rate, it sounds like Athis needs to be taken down a peg.  As newer Companions, we’re encouraged to challenge each other to sparring matches out in the training yard, in order to practice our combat skills where the elders can observe our progress.  I’ve been feeling more confident lately and there’s no time like the present.

I find Athis upstairs sulking in a corner.  He looks a bit startled when I speak to him, but he recovers fast and still manages to sound arrogant.

He grabs his weapons and we head out to the training yard.  I glance up at the sky uneasily.  The weather is looking ominous.  Rumbles of thunder roll across the clouds and the wind has definitely picked up.  I just hope the rain holds off until after the fight, because slipping on wet cobblestones and falling on my ass in front of everyone would be really awkward.

The fight starts.  I expect him to come at me, but instead he holds up his shield and starts backing away.  Then he actually turns and sprints up the stairs toward the Skyforge.   What in Oblivion…?

I raise my weapon and close the distance.  As I approach the stairs he suddenly rushes down the steps toward me, dagger raised and shield out.  Clever.  He’s using his momentum to try and bash me over the head before he slashes with his blade, but he’s telegraphing his intent.  It’s similar to a move I’ve seen Jenassa make and she does it better.

I clip him with my shield just in time to deflect his attack, sidestep so that he’s caught off-balance, and bring down my mace.   He turns and raises his shield to protect himself, but he’s a little too late.

After I deflect his opening move and turn his momentum against him, he doesn’t recover his advantage.  He seems to be a one trick pony, over-reliant on a successful first attack.  I pummel him around the yard as he vainly tries to defend himself, but his dagger doesn’t have enough reach and his shield is too heavy for him.  His arm is getting dragged down by its weight, leaving himself open.

The other Companions around us start to clap and cheer.  I’m not skilled enough to actually toy with my opponent, but I have to admit I’m enjoying myself.  It’s getting harder and harder for Athis to block my attacks, and he’s tiring faster than I am.  Finally I finish him off with a solid blow that knocks him down, and the fight is over.

There’s a few more claps and cheers before the onlookers start to disperse.  Athis stands up and dusts himself off, looking a bit chagrined, and acknowledges that I’ve won our sparring match.  As if on cue, the sky opens up and the rain starts to fall.   I’m glad it didn’t rain even a few seconds earlier — this way, there won’t be any dispute over whether it was a fair fight.

I sheathe my weapons and make my way back to the Bannered Mare.  The rain is steady, but it’s more of an annoyance than an actual problem.  At least it’s not coming down as hard as it did last night, but I’m not looking forward to hunting bears in this weather.  Not to mention that any sensible bear would be probably be deep in its den, warm and dry and well hidden from uncomfortably damp hunters.

Entering the inn, I find Jenassa at the bar having a full-bodied liquid breakfast.  She raises an eyebrow as I explain Aela’s latest assignment, and asks if we actually have to kill the bears — or just collect the pelts.  It takes me a second before I catch her meaning.  She’s saying perhaps we can just buy the pelts.  Brilliant!  I knew I hired her for a reason!

We drop by Belethor’s general store and do some bargaining, but he admits he’s fresh out of pelts.  I ask Anoriath at the butcher stand if he has any bear pelts we can buy, but he says he mostly hunts venison.   I decide we might as well try Warmaiden’s and see if Adrienne can help us out, otherwise we’ll have to brave the wet weather after all.

Halfway down the street, a stranger runs up and says he’s been looking for me.  I drop my hand to the hilt of my weapon, but then he reaches into his pouch and gives me a letter.  A letter!  It must be from my business partner back in High Rock!  Roddy figured out how to get in touch!  This is fantastic!

I glance at the letter.  It’s definitely not from Roddy.  I don’t recognize the handwriting at all, and it’s anonymous to boot.  Then I start reading, and my heart sinks like a stone.

I stand there in shock, staring at the wet pages without seeing them as my emotions spin around and around.  Jenassa, realizing that something’s wrong, asks if the news is bad.

I wordlessly hand her the letter and walk through the city gates, into the rain.

4 thoughts on “Chapter 8: When It Rains, It Pours”